Past Articles on Bridge Construction

Letters of Support for Oxtongue re: Hwy 60 and Bridge Construction

In early July 2008, as news began to spread of the pending construction on Hwy 60 and the rebuilding of the Oxtongue Lake and Oxtongue River bridges, letters of support and concern were sent to those at the MTO and URS Inc. who will be making final decisions re: design, scheduling, etc.  NOTE: for those using dial-up, some of these letters will take longer than others to open. 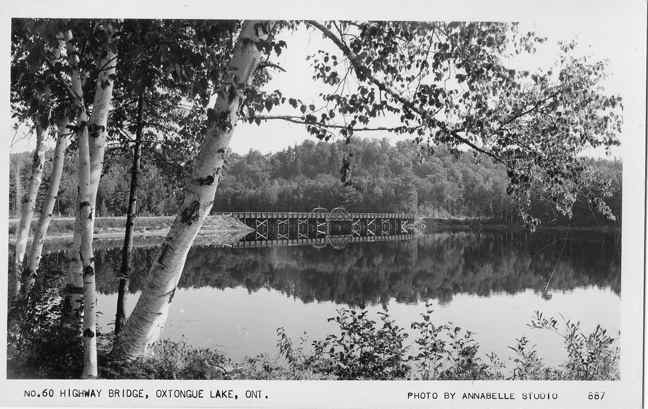 On July 10, representatives from Ministry of Transportation Ontario and a Project Team from URS Canada, Inc. convened a Public Information Centre at the Oxtongue Lake Community Centre. Its purpose was to present the current status of proposed plans to replace the Oxtongue Lake Narrows Bridge and the Oxtongue River Bridge on Hwy 60.

MTO and the Project Team from URS Canada have made public their preferred plans for building the two replacement bridges.

[NOTE: Plan 3N has evolved since the first Public Info Centre.  Originally, 3N had called for the replacement bridge to be built south of the existing bridge.]

MTO prefers option 2S — similar to the Narrows concept, the new Oxtongue River bridge would be built on theexisting alignment, with a temporary 1-lane detour constructed south of the new bridge.

Click below to view the full PDF of the MTO presentation — it’s a huge file, so those of you with dial-up should plan to go out to dinner while it’s downloading.

The Executive Committee of the OLRA urges everyone in the community to study the above URS Canada, Inc. presentation and to email specific concerns, questions, and comments directly to the Project Manager, Peter Wowk. [CLICK HERE to have your email program address an email to Peter Wowk.]

NOTE: BE SURE TO INCLUDE
YOUR FULL NAME AND STREET ADDRESS
in any correspondence, whether email or snail mail.

As an alternative to email, you may write/fax Peter Wowk at:

Your comments regarding the proposed construction will assist the Project Team in meeting the requirements of the Environmental Assessment Act, and your correspondence to Mr. Wowk will be maintained on file for use during the study and may be included in official documentation. With the exception of any personal information, your comments will become part of public record.

There are a number of construction options being considered by the Ministry of Transportation Ontario for the rebuilding of the Oxtongue Lake Narrows and Oxtongue River bridges (see links to URS Canada Inc presentation, below). No doubt, members of our community will have strong and varying opinions as to which options make sense and which options should be dismissed.

The Executive Committee of the OLRA believes its role is:

The Executive Committee of the OLRA does not intend to formally endorse nor formally dismiss any construction option unless there is an overwhelming mandate from the community to do so.

“We’ll be keeping a close eye on the situation.”
– Warden Eleanor Harrison

“We’re at risk of being torpedoed and sunk by our own provincial government.”
– Gary Schultz

Business owners and residents in Oxtongue Lake are extremely apprehensive about the impact that two years of bridge construction will have on their community. It’s a tough situation.  There is no doubt on anyone’s part that the bridges need to be replaced, but local businesses that employ so many people in the area know they can’t bear the burden of losing two tourism seasons. County Council say they’ll keep a close eye on the situation, but how much pressure they can bring to bear on the machine called MTO?

Peter Wowk, the Senior Project Manager from URS Canada Inc., retained to complete the preliminary designs for both bridges and detailed design for the Oxtongue River Bridge, outlined the preferred alternatives for the bridges determined after a first round of meetings with the community. Wowk told County Council that, as well as an environmental study being conducted, work on the Oxtongue Narrows Bridge would remain at the preliminary design stage. The bridge over the Oxtongue River, however, will advance to a detailed study which includes preparation of a contract package.

Wowk advised County Council that his company had met with the Oxtongue Lake Ratepayers Association to get input and concerns, some of which would be addressed, including a sidewalk on the narrows structure, improved site lines and reduced speed limits through the community from 80 kilometres to 60 kilometres.

Warden Eleanor Harrison told firm representatives, “You have to understand that this is a commercial strip with many resorts that have very valid concerns.” Harrison spoke about the community’s concerns about poor site lines at the narrows bridge, but the company claimed no responsibility for that.

Harrison said, “Oxtongue has been trying to get through to MTO the extent of their concerns and the long term effect on their businesses and they can’t seem to get any answers. I’m very concerned myself that once this goes out to tender it will be too late.”  Harrison acknowledged the need to replace the bridges, but also told Wowk that the community would be seeking confirmation that their businesses would be impacted as little as possible and that there would be compensation for any loss of business.

When Harrison voiced concerns about the fact that construction would be ongoing for more than one season, Wowk confirmed that it would definitely take two seasons, given restrictions working on the water. He also confirmed that time lines would be looked at carefully during the detailed design stage.

Harrison said, “If we get asked for help at this level, we’ll try to ensure some form of compensation is provided to them. That is what this table will be most interested in and our Economic Development & Tourism Department will be keeping a close eye on the situation.”

Despite assurances that MTO representatives are addressing area concerns, Gary Schultz doesn’t agree. Schultz is the President of the Oxtongue Ratepayers Association and the owner of the Algonquin Inn and he said, “The main issues of the community are still not being dealt with. They are just going through the motions of a government routine that is required with zero consideration for us.”

“To survive a loss of income for one summer is hard enough, but to ask tourism businesses to go through two consecutive summers is asking us to close the doors and throw away the keys,” he said.

Schultz said, “We are a small unique environment here; it’s a little lake only three miles long, but we are the threshold to Algonquin Park.  The vast majority of visitors come through Oxtongue Lake. We have 10 resorts, the majority of which are year round operations catering to the public in a unique area.  I don’t believe there is any other lake that can sustain 10 resorts.”

Schultz said that his inn opened in 1945 and the others had been in place since the 1950’s. “These are generational businesses that have survived all the twists and turns of the economy, while others have fallen by the wayside. They are all vibrant healthy tourism based businesses in a small community that survives because of tourism. It’s all we have.”

Schultz said, “It’s not just our businesses; it’s our homes.  I can’t go through two years with no income, nor can the family members that I employ.”  The Algonquin Inn, like all the other resorts is their home as well and he, along with the other business owners, is very concerned about losing, not only their business, but their homes as well if forced into bankruptcy as a result of the project.

“The irony is that we’re surviving the trials and tribulations of the marketplace but are now at risk of being torpedoed and sunk by our own provincial government and MTO. Our own taxes will end up hurting us and that’s a hard pill to swallow.”

Schultz spoke about unresolved construction issues. He said there are two blind curves right at the threshold to the bridge at the narrows. He voiced frustration with the fact that MTO seem to be prepared to put in a multi-million dollar bridge but not address blind curves. According to Schultz the consultants passed responsibility off to another department, saying that there was no obligation on their part.

“It’s our position that if there is going to be a major disruption, why not make the full repairs that are required?”

Schultz did say that the consultants have promised that things will be business as usual and that they will do everything possible to ensure that guests have access to his property. He said they feel their obligation is finished at that point; but Schultz has spoken with Muskoka Tourism who suggested that it would be impossible to remain physically open during a major civic project less than 50 feet away from a bedroom that is supposed to be surrounded by a tranquil atmosphere.  Instead, Schultz says it will look like a war zone with tractor trailers and earth moving equipment, barges in the water with drilling equipment on them, porta-johns and job shacks.”

Schultz spoke about MTO’s policy that during a construction project people are supposed to conduct business as usual; once the project is completed and only then, should they feel that they have suffered or incurred a business downturn as a result of the project and can prove it, a claim can be submitted to MTO for consideration.”

But it’s obviously not that simple. According to Schultz, Algonquin Outfitters suffered through the same situation in 1964 during the last bridge replacement. MTO physically moved the store, but when they submitted a claim it took 20 years in the courts to achieve a settlement and it was smaller than the legal fees which the judge made MTO pay.

“We know we need the bridge; it’s falling in the lake. But as a community as also need to survive the process.”

The Ratepayers Association has been in touch with MP Barry Devolin, MPP Laurie Scott and five other MPP’s, all of whom have written letters to the Minister of MTO saying that the situation must be dealt with before the project commences.

Letters from several municipal Councils, the Canadian Federation of Independent Business, Haliburton Tourism and a number of tourism and accommodation associations have all written to the Minister echoing the same sentiments that the concerns of the community need to be addressed before the project gets underway, not just for industry but for the employment it brings to the community.

MTO’s response? According to Schultz common sense does not prevail and they’re saying no; they have a policy and they’re sticking to it.

Schultz did have one solution to offer. MTO could rent resort facilities to house their people. He said, “We’re isolated and they will have to bring in construction crews and house and feed them. They’ll need storage space, so why not rent space from these people? If they’re spending millions of dollars they could factor rental space and compensation into the budget and would also have the added benefit of using our facilities”

Another concern is the single lane detours being suggested, and the community are seeking two lane detours.

Schultz said, “They have no idea how many people travel through here to see the fall colours alone. We have trouble trying to cross the road at times.  Last fall there were 780 coaches full of people going to the park to see the fall colours, which are promoted worldwide by the park. Imagine putting a single lane detour in the midst of that. It will be a very black eye on the park, and they are very concerned about it.”

Schultz said that the bottom line is that they have 10healthy businesses in their tiny resort community. “We’re healthy and surviving right now.  We should do everything that we can to ensure continued employment in Haliburton and our own provincial government is going to torpedo us.”

For more information on the Oxtongue Lake Ratepayers Association visit their website: www.oxtonguelake.ca.