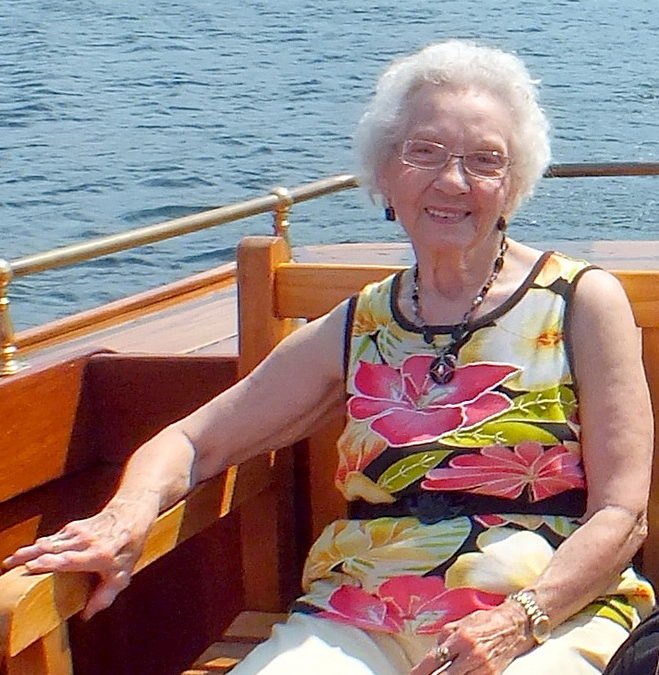 Turn back the year to 1926, and that is when Florence Bowen was born to Bill and Aletta Card of Bancroft, Ontario. Born into a farming family, Florence, who soon became known as Flossie, grew up to love the outdoors, fishing in nearby lakes, frolicking through the pastures, climbing trees and she even has fond memories of walking to and from the old tin schoolhouse that still stands today.

As a child, Flossie helped on the family farm surrounded by her 2 sisters after a third sister died at an early age, and her 2 brothers, one of whom saved Flossie from drowning in the lake on the farm property when she was very young.

Flossie always had a flare for fashion, a sense of adventure as well as a real ear for music. She taught herself to play a guitar as a teenager, and she and her sisters could carry a lovely tune as she strummed chords. Sitting on a favorite old boulder that was the hub of their refuge when in need of some quiet time, they could pass many hours enjoying this pastime.

As a young woman, Flossie worked at different establishments in the Bancroft area as she tried to make her own way in life. For a spell, she worked in a hairdressing shop, was a maid at the Bancroft Hotel for 2 years, was employed as a housekeeper at a private home, and when higher wages were promised, every summer, she, her husband-to-be, Marvin, and her sister and husband headed to southern Ontario to pick tobacco.

Once married and situated at Oxtongue Lake, Marvin said that “Flossie worked as hard as any man” to assist him as he built their home, dug a well, cut wood…whatever was required, she was in there like a dirty shirt. In true loyal fashion, she even shared Marv’s night watchman responsibilities at the original Algonquin Park Gate as it was being constructed.

Around their home, Flossie used her experience on the farm to raise a healthy flock of chickens, while observations made when working at the Bancroft Hotel served her well as she managed their own cottage business to supplement Marvin’s income. She was a busy woman who designed and sewed most of her daughters’ clothes, even those of their Barbie dolls and baby dolls, and to this day, she can adeptly remodel, resize and redesign garments to suit her needs.

Flossie has a reputation for being an excellent cook and baker, skills that she basically taught herself by following recipes in the old red Purity Cookbook after getting married. That worn and faded cookbook is still used reliably today despite its creation way back in 1932 by the Purity Flour Mills Limited, Toronto.

When times were tough, creativity became a necessity to make ends meet. White sugar was always purchased in 100-pound heavy-duty cotton bags that were washed, bleached and turned into tea towels and pillowslips, while the yellow and blue tin pails that originally held honey were recycled into lunch pails. Flossie wasted nothing, and if something broke down, she took it apart and fixed it proving herself to be very handy.

Too busy to participate in the Huntsville Fall Fair when the girls were growing up, in later years, Flossie has made a name for herself among other competitors for her first-prize-winning preserves and pickles, knitting and sewing, and especially her folk art crafts and stained glass art.

It just goes to show that hard work never hurt anybody. It has played a part in Flossie’s continued good health, and years of cross-country skiing helped to keep her physically fit. As Flossie turns 90 on August 21st, we want to wish her all the best and ask that maybe she slow down just a little. We tell her that it isn’t necessary to push the snowblower any longer, but we are happy to let her whip around on the John Deere when cutting the grass. That is fun, after all. Happy Birthday Mom!